After a cancer diagnosis, Rose Bermanski was told she had a life expectancy of three months. She moved from her retirement home to the Shirley and Philip Granovsky Palliative Care Unit at Baycrest.
But instead of a further decline, her health began to improve after two or three weeks. Rose had survived four concentration camps in the Holocaust, including Auschwitz, and had a strong will to live, says her daughter
Karen Gluckstein. 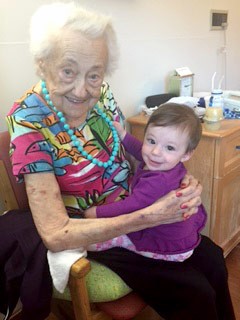 “The care was so loving and compassionate at Baycrest. Everyone adored her. She even went to exercise and craft classes.”

When it became apparent that Rose didn’t require palliative care, she moved to another part of the hospital and then eventually to the Apotex Centre, Jewish Home for the Aged.

Karen says her mother enjoyed visits from the rabbis, went to many prayer services, attended the bingo games, loved the concerts and was an involved member of the beading group. She always had a smile on her face.

While Rose was living at Baycrest and before she passed away at age 92, she saw her granddaughter get married, the arrival of one great-grandchild and then another.

She enjoyed every moment of her life in Baycrest.

“We had 2-1/2 years with her that we wouldn’t have had – and we really believe it’s because of the care at Baycrest,” Karen says.

To honour Rose, the family asked that donations in her memory be made to Baycrest.